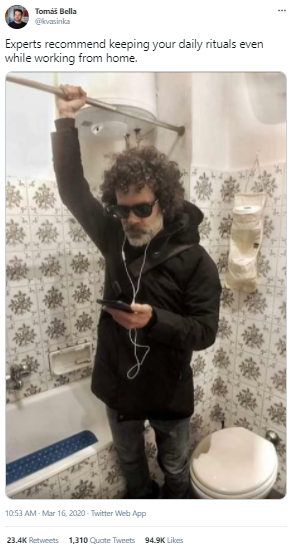 How do we rationalize the “Work From Home” phenomenon? The easy answer is that covid showed us that just about any job could be done from the safety, comfort and sweat pants of home. Except, of course, the essential businesses like grocery stores, landscapers, liquor stores and gun ranges. The more nuanced answer is that both employers and employees have discovered that productive work can get done without everyone lounging around the office snack machine.

For years, employees were asking for a little more leeway in the “gotta be in the office” policy. The information economy and the drastic fall in the cost of personal technology made it feasible to work from home if the need arises. Like both your children barfing at school and being sent home. In time, maternity and paternity leaves got a little longer and a little more flexible. Here are three examples of the evolution of “Work from home.” Be advised that the names have been changed to protect the innocent.

Two people we will call Jay and Kay worked for a company we will call Mexxon-Obil and had a baby. Kay got 8 weeks of maternity leave. Jay got nothing but a few days off. For baby #2, Kay got 12 weeks of maternity leave and Jay got 4 weeks of paternity leave…..and the time off didn’t have to be taken simultaneously. Baby # 3 came along: Kay got 12 weeks, Jay got 8 weeks and, after Kay’s 12 weeks were up, she was allowed to work from home, part-time for another 8 weeks.

The second example is a little different but echoes what happened at schools across the world. When the shutdown happened, in March of 2020, things turned on a dime. I taught completely from home. We used Canvas’ Big Blue button to record lectures and post them online.  Some of us used Microsoft’s “Teams” (mostly the business pukes) but most used the free version of zoom to teach classes. (Remember the free version? 40 minutes and then you had to sign off and sign in again for another 40. Not ideal but do-able.) I never thought you could teach a public speaking course online….but we did. Again, not ideal but do-able.

And then there’s Scooter. (Again the names have been changed to protect the innocent.) Scooter worked for a smallish bank in a small Wisconsin town that has a brewery that makes several delicious beers that we, in Illinois, can’t get. Scooter likes to dip his toe in “employment” pool every once in a while just to see if there is any interest in his particular set of skills.

Scooter got a call from a smallish bank group in Seattle. They hired him (without an in-person interview, mind you) and told him he could completely work from home. The deal is, after a year, they would then reassess and make a decision on moving to Seattle or staying completely remote. Forever.

The bottom line is that all the money that Google, Apple, Facebook, and the other tech giants invested in ping pong tables, juice machines, sleep pods and Hello Kitty décor just to entice workers to want to work in their trendy offices, was all for naught. The modern information worker can stay at home, use their own juice machine and not have to buy pants. It’s a brave new world. Unless you run a liquor store or gun range. Then, sorry to say, you still need pants.

“Ask questions! We are available during class and provide extra office hours for your benefit. Our door is always open!” – Prof. McHugh

“Success consists of going from failure to failure without loss of enthusiasm.”