When you have had enough, it becomes time to stand up and fight for what is right. To actually figure out what IS right in a time of chaos and then use your powers and talents to truly do the right thing at the right time. We all need to figure out what that is, now, and DO it.

The producers of Saturday Night Live did that this past weekend (Feb. 26) on behalf, perhaps, of all New Yorkers. Maybe on behalf of our whole country. More on that below; first some backstory that brings us through many of the Big Historical Things that have been going on before coming back to SNL.

We are all familiar with the continuing fatigue from experiencing the "unprecedented" aspects of various "historical events" throughout the last few years. What has been going on? I won't start with the most obvious example, but a sampling follows.

Various people decided to murder journalists in Saudi Arabia and Maryland, to re-create Nazi-esque tiki-torch parades in support of White nationalism and anti-Semitism, to approve authoritarianism around the globe and to a elect a mobster wanna-be and alleged real estate tax cheat to the highest office in the United States. Concurrently, in our country we have decided (more than we usually do) to ignore race relations, healthcare, science, truth and the poor in favor of greed, oppression, celebrity & absolutely obscene profits for people who already had more money than they knew what to do with.

And of course, the obvious. Covid-19, has literally "plagued" us across the planet. It continues to linger and kill us, even as we (yet again) try to "open up" in the face of a pandemic where over a already sacrificed over a million people have been sacrificed on the altars of unpreparedness, ideology, hubris, profiteering, poll numbers and sheer ignorance of the ways of the natural world.

Perhaps this is really the time to relax requirements, and perhaps our leaders are favoring political pressure and our inability to cope with discomfort over more measured action. We shall soon see. In any case, Covid-19 seems here to stay for a while in some form.

Then we have China, where Covid-19 originated. But now we focus on its human rights violations, genocide, espionage and power-brokering around the world. They are using oppression at home to try to wipe out minority cultures, and dominate freedom-loving cities and islands to "win" the long game it is playing to become the dominant superpower.

Not to mention the various machinations of our corporations and our government (intended and unforseen, on the Right and the Left; the current global super-power China is out to dethrone) that so often result in suffering and death even when we say it is unintended.

And now, we have the war in Ukraine, a naked power grab for land and resources and shipping access by a despot running an oligopoly just as malevolent as the Tsars or the Politburo that replaced them. Ukraine is not Russian in culture or language, even though the Soviets tried to wipe those out for decades. Ukraine has its own proud history, culture, language and customs, and despite an invasion involving roughly 70% of Russian armed forces as per NPR, they have been holding on, defending their country against (here it comes) an unprecedented attack. One not much different in purpose than the invasion of the Crimean Peninsula, again by Russia eight years ago, also in an Olympic year, also in February and March. And taking Georgia before that, and shooting down a passenger jet, and poisoning political rivals, all without much response from the world. They got away with it. Until now ...

As has been reported elsewhere, a uniquely United Europe and the U S. are currently supplying arms for Ukrainian forces, with Germany leading the way. The fight continues to be fierce, not the easy victory Mr. Putin anticipated. And Europe is rallying behind Ukraine.

Unofficial local defense forces with nothing more than a few AK-47s are trying to disrupt advancing Russian special units who pick targets and set markers for the next wave of bombardment. All the while, the Ukrainian President walks the street of Kyiv (KEE-EEV, not Key-YEV...) with his phone, posting visuals of the situation, encouraging his people, and remaining in the capital city, knowing that he is a high-profile target for Russian troops. Not bad for an actor and comedian-turned- president!

Russia wants to de-Ukaraine-ize, not "deNazify" the Ukraine as was initially explained ... by ex-KGB Russian leader Vladimir Putin. They want to turn an independent country back into a satellite or province that is fully Russian and eliminate the culture and the identity of the people of a sovereign nation.

The people of Ukraine are fighting back. The army as well as individual groups defending their towns and homes. Reports of captured Russian troops and disabled Russian tanks have surfaced. As of this writing, the Ukrainian people are holding on and the Russian military mobilizes more reserves. It seems much like the Sudetenland in then-Czechoslovakia, or Poland, each before WWII. Or Crimea, as mentioned above. Lying to excuse invasion. It "worked" in March of 2014. I hope it fails this time around and Urkraine prevails.

Meanwhile, in the U.S., we complain about gas prices, fear of vaccination, lack of access to restaurants, supply chain issues, being uncomfortable wearing masks, and efforts to teach our children accurate history. And we concentrate on these things after U.S. citizens stormed the Capitol building because they don't actually want to live in a democracy that tries to fulfill the actual will of its own people.

Then, in the process of sorting out what did happen, they act like a physical attack on government officials and property was either part of a some weird capitol tour to get revolution selfies or as the RNC described it, "legitimate protest." It was neither. It was, pretty much, a textbook example of sedition with a crowd of distracted, wandering tourists for cover.

There was, however, legitimate protest over the Ukraine invasion by thousands of Russian citizens, in Russia, where they face great danger if arrested. And by many tens of thousands in Germany and across the world. There has been, however, legitimate protest around the globe against the murder of Black men, women, and children by both police and private citizens in the Land of the Free and Home of the Brave.

Americans have many good qualities; over the past several years we have not been putting out best or smartest foot forward. But there seems to be bi-partisan support against Russian aggression, and broad popular support of Ukraine here right now. 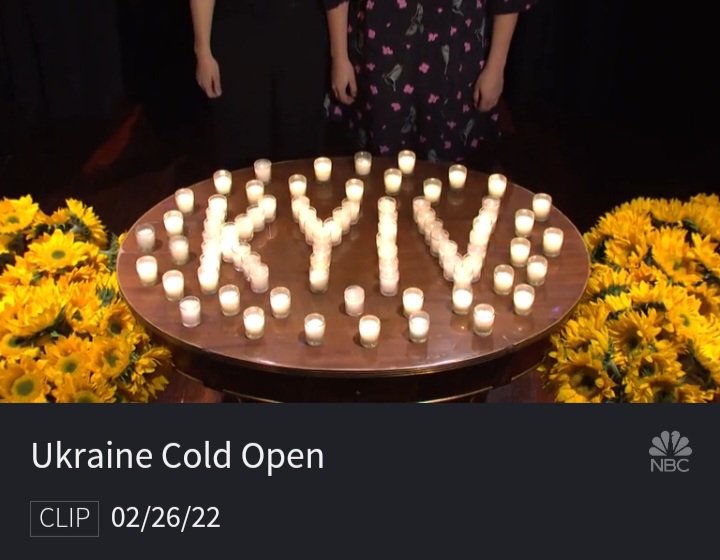 There is nothing especially wrong with Russian culture, unless it is being forced on people who don't want it, like the Ukrainian people. Also like the Indian boarding schools for children in the U.S. and Canada in the 19th and 20th centuries. In this case, the particular culture of Ukraine has been, and is again, at risk.

In that SNL opening, a chorus of human beings was on view, not pictures of maps or machinery or explosions. They sang a prayer of support for their country, their people, featuring rising Ukrainian voices and shining Ukrainian faces.

The point was clear: Ukraine, NOT Russia. The producers used their organizational, aesthetic and production skills to make a statement.

And people all over this country around the world wept. SNL did and said the right thing at the right time for the right reasons. And live TV, with a boost from news outlets and video streaming was the right medium.

It is time for each of us to do the same thing, but not exactly that because we aren't all SNL producers. Really think about all of the things that we complain about that are straight-up nonsense. And then get off of our (often) quite privileged duffs to do something real to help these people, or other folks who are *actually* fighting. For. Their. Lives.

In memory of the security guards on Snake Island, Ukraine, who told a Russian warship exactly what they could do with their offer of surrender. This was shades of American General McAuliffe, in temporary command of the 101st Airborne Division, who told the Nazis, "Nuts!" when they offered a similar deal at Bastogne during the Battle of the Bulge. In McAuliffe's case, the Nazis were defeated. Early reports about Snake Island said the thirteen Ukranian security guards were obliterated when the Russian warship kept its promise to kill them if they did not surrender. Now it seems they were captured and sent to Crimea. Either way, they stood up against overwhelming odds because they were fighting for their country, on home ground. They did something powerful.

They will live on as an inspiration to the people of Ukraine to stand up and fight invasion of their country. There hasn't been a European invasion of this magnitude since WWII. That was when my Dad (a US. Army trainer, tank commander, and cartographer whose 100th birthday would have been just two weeks ago) was a teenager, over 80 years ago.

What can you be inspired to do in light of more unprecedentedness? Stay informed by fact-based news, donate money to support refugees, call your Congresspeople to get aid to Ukraine. Sing or say a prayer, talk to people, light some candles. Feed those who are hungry. If you need a recipe, I have included one given to me by a Ukrainian-American friend over forty years ago: his mother's recipe for Ukrainian borshcht, written on an index card in fountain pen. Ukrainian, not Russian, borshcht. Made from scratch.

You'll notice that the ink on the card is smeared and the card is well-used. I have made this soup for years, probably a hundred times for family, for friends, for potlucks and holidays. For wintertime, just because it is "soup season." It is an act of extending Ukrainian culture into the world no matter what Vladimir Putin and the assassians and mobsters who currently run Russia want to do.

Ukrainian faces, voices, clothing, food, life. Lives. That is a part of what is at stake, right now . So help Ukraine if you can. If you can't do much, make some soup. Feed opposition to the invasion, feed your body and soul, and those of friends and strangers. Do something so that the Ukrainian people can continue to feed themselves, and their descendants, in their own sovereign nation, far, far into the future.

If you cannot read the well-used index card, here is the recipe:

NOTE: Recipe from Alan, a law school student I trained with on sabre squad of the University of Minnesota Fencing Club in the autumn of 1980. This is his mother's recipe: from the Old Country, written from memory, in fountain pen on a 4x6" index card. Alan, wherever you are, bless you, your ancestors, and the people of Ukraine! 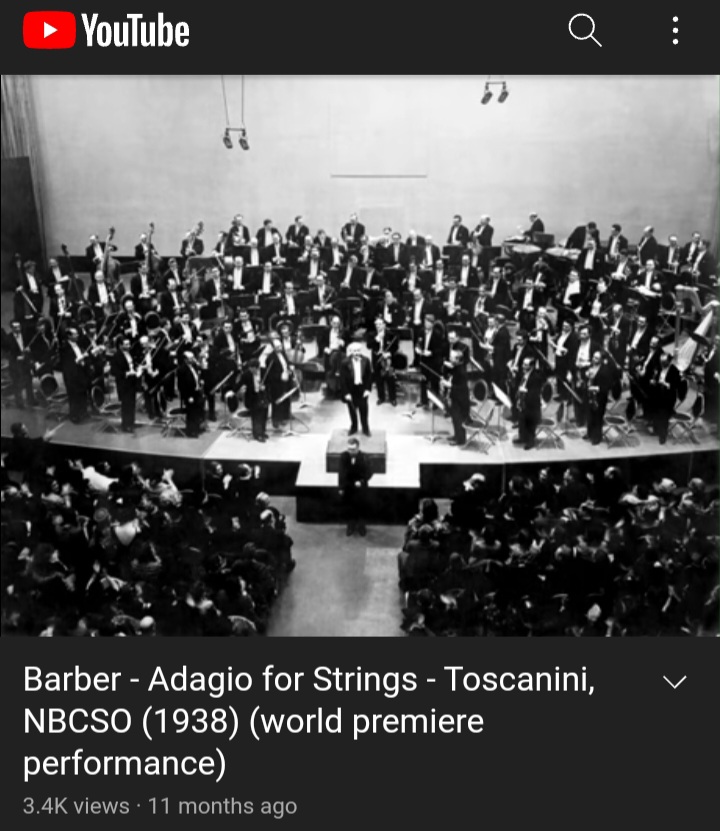 You can find a link to the SNL opening segment on NBC's website:

I included a few screenshots of the Ukranian Chorus Dumka of New York on SNL from the video at that same NBC link.

Bless NBC as well. NBC was the network that, on November 5, 1938 premiered Samuel Barber's Adagio for Strings, performed by NBC's own studio orchestra, conducted by Arturo Toscanini. Maestro Toscanini was persecuted for his opposition to both Italian and German Fascism. He narrowly escaped Mussolini to come to America and used Barber's powerfully sad yet hopeful work as a musical commentary on the authoritarianism engulfing Europe. Here is the link to a picture of the orchestra and audio of that performance: