What Would Francis Do?

Change is, of course, always with us.  Galaxies spin, stars are born and die, the Earth keeps on turnin’.  We constantly discover more about history, science, art, ourselves, friends, family.  Our discoveries sometimes illuminate our lives and sometimes shatter our assumptions.

The other day I came across a USF Mission Integration memo (back when we had memos …) from 1998 that explains pretty clearly that The Prayer of St. Francis cannot be traced back to Francesco Bernadone, aka St. Francis of Assisi.  In 1996, Franciscan scholars Willibrord-Christian van Dijk, OFM Cap and Father Damion Vorreaux determined that the prayer surfaced in 1922-25 in France, Germany and the Netherlands, in both Protestant and Christian contexts, often as an ecumenical peace prayer, very often connected with St. Francis.  But ultimately, they concluded that, based on the “history of the text, … the prayer had nothing to do with 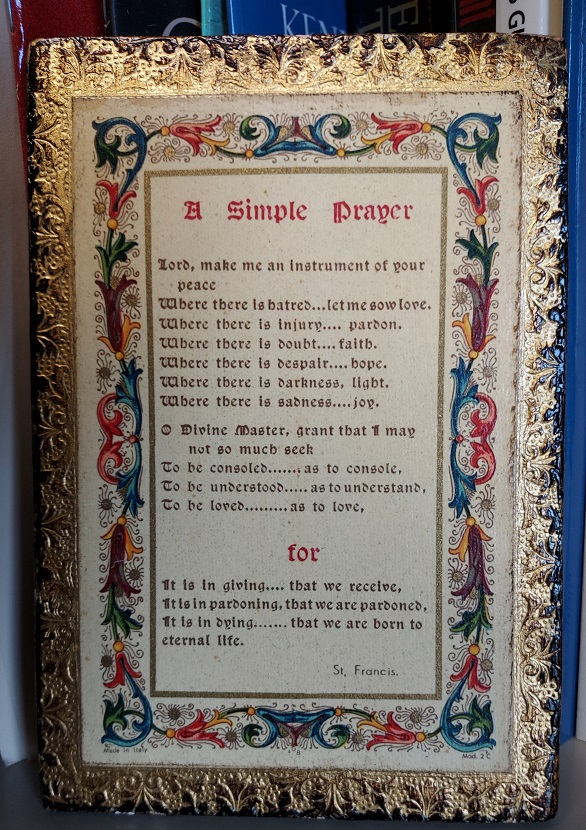 the writings of St. Francis” but “it resembles something that medieval piety and a Franciscan soul could have produced.”

In the study of communication, we know that meanings are not in words or documents, but in people.  The thing carries a message that may or may not resonate with the reader.  But it still seems important to many people that such a document be “truly authentic,”, especially in a religious context.

Most theologians and archeologists know that you could build a house out of all of the fragments of the ‘one true cross’ that have been sold over the millennia.  Even so, people sometimes feel that it is “more real” if there is a verifiable and unbroken chain of history from an artifact backwards in time to the “source.”  Is the plaque on my office bookshelf that contains that prayer less important because the text on it cannot be directly linked to St. Francis?

People like to be able separate the wheat from the chaff, the sheep from the goats, the “them” from “us.”  It generates a feeling of exclusivity and righteousness that charges people up and assures them that they are good, or maybe that they are at least okay.

And some folks take a harder line.

“If you can’t tell the “real” from “fake,” what good is it to have standards at all?” they might say, “Either it is real or it is not—which is it?”

As always, it turns out that to be more complicated than that.  What are our criteria for what is “authentic?”  Do they need to be scientific or otherwise academic?  It would be nice if it were simple to ascertain, but reality is often a bit more slippery than we would like it to be.

There are genuine artifacts and verified information that don’t seem to connect with what we would like to believe.  Or that just do not seem all that exciting, which is why we have scholars to investigate and explain what the rest of us would ignore.  In turn, there are not-so-genuine artifacts and documents that truly embody the spirit of the times and places and people to which they refer.

The Prayer of St. Francis is a document in the latter category. It wasn’t written by St. Francis.  It only appeared in the early 20th century.  It was surely created hundreds of years after Francis died, just after admonishing his followers  to “Do what is yours to do.”   Some devout unknown soul was inspired so to do, and that was to write a prayer that contained some pretty genuine Franciscan spirit.

I would venture to guess that thousands of religious and lay Franciscans throughout the decades have memorized and made use of this prayer as a key ingredient of their devotional lives.  It unifies clergy and laypeople, Franciscans of all types, Protestants and Catholics as well as members of other faiths around the globe who venerate St. Francis, and even non-believers.

The power of this prayer has organized and focused prayers and hopes and thoughts of possibly millions of people over the decades, partly due to the magic of mid-20th century media.

I did not first encounter the prayer of St. Francis in church, but rather every weekday morning on a local radio station that his clock-radio was tuned to.  This full-service radio station played a wide variety of music and also tried to appeal to a range of tastes in belief.

So, they ran a daily horoscope announcement with some interesting “space music” in the background and then segued right into the Prayer of St. Francis.   Covering all the bases, I guess.

As a kid, the weirdness of the horoscope music and a line about “knowing the future” got my attention and usually woke me up, just in time to hear the prayer.  It wasn’t a prayer I had often heard in my home church, but it resonated with me.

The depth, sincerity, reassurance and individual challenge offered by the Prayer of St. Francis touched me deeply.  Little did I know that my future would include serving students at a  Franciscan university, finding ways to help them integrate Franciscan ideas and practices into their thought processes and mindsets!  The prayer opened parts of my heart and brain to understand the perspectives of others and then to find practical ways to help those in need.  Not bad for a third grader; this was at a point where I was just beginning to sort out what I believed, and to realize that people believed many different things.

To me, the prayer speaks for itself and encapsulates much of the essence of Franciscanism.  Just hearing a heartfelt expression of the prayer was enough to make me think and feel and mull over what I believed.  And I have believed in the message, the heart of this prayer, ever since the first time I heard it.

Which brings us back to what we believe and why we believe it.  The Prayer of St. Francis exists, and van Dijk and Vorreux suggested that we “continue to make its words, sentiments, and actions our own and love it with a deeply Franciscan heart.”

No matter who wrote it, it has been an inspiration to millions.   Certain things can be a basis for belief even if there is not a direct chain back to antiquity.  And it doesn’t really matter that Francis did not write it himself, in the 1200’s or that a Franciscan monk did not write it later on.  It matters that it is here, that it invites us to have faith and to act on that faith.

That does not mean that all reality is up for grabs, however.  If I don’t believe in gravity, it still works the same way.   The Earth is certainly not flat, no matter what I might think.  There are just some things that you cannot make true merely because you want to.

Yet, artifacts like the Prayer of St. Francis that survive and grow in meaning over centuries show that something done with the right intention and with an understanding of Franciscan spirit can link all the Franciscans who have every said or heard that prayer.  And in my mind, the sentiment, the essence of it, somehow does travel all the way back to Francis himself and the ideals he held when he started his humble band of brothers.  Brothers who got down to the thankless business of helping those who were least able to help themselves.

Franciscan renewal carved a path around the world and out of the high Middle Ages, cutting a swath of love and service through a world he found in the mired in war, disease, chaos and human frailty.  The Conqueror, War, Famine, and Death are always standing by, trying to eat away at both our beliefs and the works inspired by them.

The Franciscan path is no longer new, but it has evolved as the world has changed to keep its values relevant.  The war, disease, chaos and human frailty are still with us; the white, red, black and pale riders seem to keep pace with the world as well.  These stressful times stretch us to what we think are the boundaries of our patience, kindness, care and strength.

Ignorance seems to rear its head in time with Want, the two hideous, tormented and malformed children that humankind have borne, hiding under the robe of the Spirit of Christmas Present, according to Mr. Dickens.  And though Yuletide is long past, both Charles Dickens and St. Francis would approve of us keeping Christmas in our hearts throughout the year.

It is indeed possible us to find our own ways of doing that, even (and perhaps especially) in the sub-zero sting of Chicagoland winter.  Even during a pandemic.  During climate change.  Even when we are trying to pay off the Christmas bills and get ready for the Super Bowl, or the next Hallmark holiday.  Or just trying to get through each day.

May each of us find what is ours to do, in this world, for those who truly need it.   In these confusing and difficult times, may what we find be that which helps us to sow love, pardon, faith, hope, light and joy where they are needed the most.  May we console, understand, love, give and pardon where it will do the most good for all of us.

That is something I can believe in.

The Prayer of St. Francis of Assisi

O Divine Master, grant that I may not so much seek
To be consoled as to console;
To be understood as to understand;
To be loved as to love.
For it is in giving that we receive;
It is in pardoning that we are pardoned;
And it is in dying that we are born to eternal life.

From A Christmas Carol, by Charles Dickens
Scrooge started back, appalled. Having them shown to him
in this way, he tried to say they were fine children, but
the words choked themselves, rather than be parties to a lie
of such enormous magnitude.

'Spirit. are they yours.' Scrooge could say no more.

'They are Man's,' said the Spirit, looking down upon
them. 'And they cling to me, appealing from their fathers.
This boy is Ignorance. This girl is Want. Beware them both,
and all of their degree, but most of all beware this boy,
for on his brow I see that written which is Doom, unless the
writing be erased. Deny it.' cried the Spirit, stretching out
its hand towards the city. 'Slander those who tell it ye.
Admit it for your factious purposes, and make it worse.
And abide the end.'

'Have they no refuge or resource.' cried Scrooge.

'Are there no prisons?' said the Spirit, turning on him
for the last time with his own words. 'Are there no workhouses?'"

“Ask questions! We are available during class and provide extra office hours for your benefit. Our door is always open!” – Prof. McHugh

“Success consists of going from failure to failure without loss of enthusiasm.”