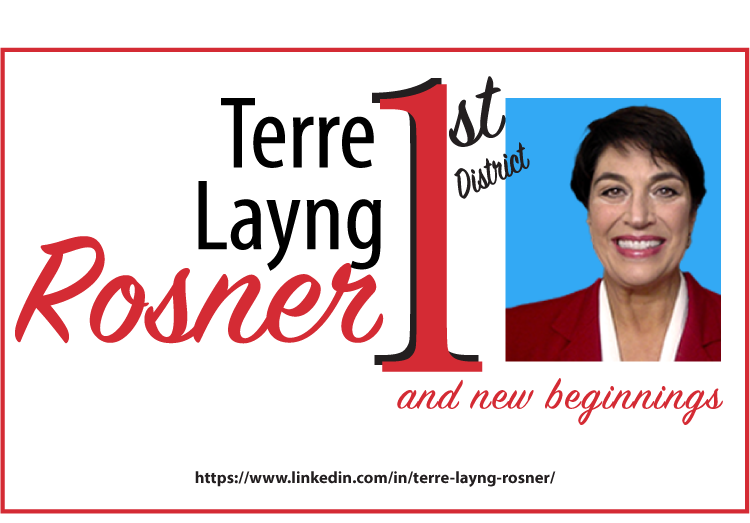 As my philosophy, I’d rather be kind than right, continues to be true. Like anything else, a philosophy should be tested and honed. However, one’s moral compass can be tempered by practicing kindness and empathy in all cases.

I preface the post by Citizens to Elect Terre Layng Rosner, with the connections made during my Higher Education career. Having taught at USF for 23 years in our exemplary Communication & Media Arts Department, I am humbled by the commitment of my stellar colleagues: Distinguished Teaching Professor Rick Lorenc, Professor Scott Marshall, Associate Professor Brien McHugh and our dedicated adjuncts like Dr. Glen Gummess, alum Madison Adduci Blackwood, Barbara Eberhard, etc.. I have done what is mine to do as an Educator. I realize that to continue in public service by promoting the ideas of kindness and empathy moderated with decency and persistence, is an equally powerful calling.

"...without money or connection to start over, to begin anew for the people living in my district"—Terre Layng Rosner

Born in Rockford, the 6th of 10 children, Terre is a lifelong resident of Illinois: attended Boylan Catholic High School, and Northern Illinois University for her undergraduate and graduate studies. She has been a citizen of the 1st district for over 36 years. Dr. Layng Rosner has spent her career as an Educator, Professor, Negotiator and Activist. She has served our community, while raising three children, going to school full-time, maintaining her responsibilities as a Department Chair and sharpening her executive leadership skills. Layng Rosner looks forward to representing ALL the people of the 1st Congressional District from our South Suburbs through South Chicago.

As a way to understand who Dr. Layng Rosner is, consider some of the experiences she has had in her long career as an Educator. Terre was elected as one of three negotiators to improve compensation, benefits and working conditions for her colleagues at the University of St. Francis (a private, non-profit institution), for 12 years. She picketed in her first year at the University, risking her job, to unionize the employees there. She has been fearless when facing the Goliaths in her professional and personal life. For example, she served many years on the Illinois Technology Resource Team (IL School District #161) as Chair and member, where Terre tackled problems concerning the elementary students’ access and use of computers and systems. She is a shrewd mediator and a loyal friend.

Terre’s husband of 37 years, Dan, has worked blue-collar his entire job life. He was born in Englewood (a South Side neighborhood in Chicago in the 1st District) and has been a staunch supporter of Unions and workers as a result. Dan and Terre raised their children to respect others and build a moral compass that recognizes the dignity of people balanced by individual choice. Dr. Layng Rosner especially emphasized that maturity is about treating one another with kindness while not forgetting our individual voice.

After making the choice to Early Retire about two years ago, from her University Professorship, Terre understood that the next step in service would be as a public representative of her Congressional District (IL). She explains her motives.

“Being a Congressional Rep. is not my career, I’ve had that: it’s a duty that my Mom and Dad instilled in me. Many have told us that this district is ‘owned’ by one constituency or another--but that’s not right. The people in our district are free to elect anyone. No one person or group can claim ownership of our government. We are the government. I am running without money or connection to start over, to begin anew for the people living in my district. From Englewood to Midlothian to Mokena to Tinley Park to Frankfort to New Lenox to Elwood. I think there is still good in our government. People like us can make it so.”