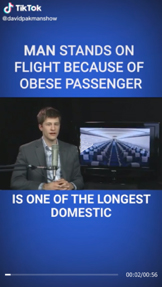 A man stood for an entire flight from Anchorage Alaska to Philadelphia, Pennsylvania. Why did the man do this? Because his seat mate was extremely obese, took up both arm rests and half the seat next to him.

What is the “best” thing to do in this case?

If I was the obese guy, then the other guy should stand because I wouldn’t be able to physically do so for the entire flight.

If I was the other guy, then the obese guy should have purchased two tickets.

If I were the flight attendants, then someone standing the whole flight could be a danger to other nearby passengers: turbulence, emergencies, etc.

If I were one of the other passengers, then I’d be grateful it wasn’t me, standing the whole flight or unlucky enough to be the obese guy.

If we were the pilots, then we we’d be glad the flight attendants had to deal with it. Not our problem, right.

If I were the airline, then we’d be terrified to be sued, in either case.

Moral of the Story:

Questions about human dignity and fairness are complex. Most people are trying their best.

Learn more at The 30 Second MBA
View All The Facts